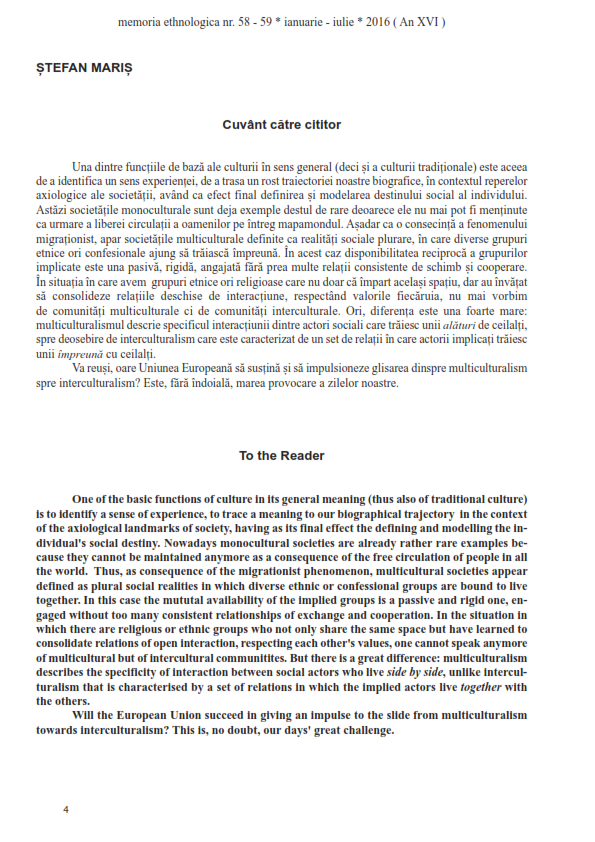 One of the basic functions of culture in its general meaning (thus also of traditional culture) is to identify a sense of experience, to trace a meaning to our biographical trajectory in the context of the axiological landmarks of society, having as its final effect the defining and modelling the in- dividual’s social destiny. Nowadays monocultural societies are already rather rare examples be- cause they cannot be maintained anymore as a consequence of the free circulation of people in all the world. Thus, as consequence of the migrationist phenomenon, multicultural societies appear defined as plural social realities in which diverse ethnic or confessional groups are bound to live together. In this case the mututal availability of the implied groups is a passive and rigid one, en- gaged without too many consistent relationships of exchange and cooperation. In the situation in which there are religious or ethnic groups who not only share the same space but have learned to consolidate relations of open interaction, respecting each other’s values, one cannot speak anymore of multicultural but of intercultural communitites. But there is a great difference: multiculturalism describes the specificity of interaction between social actors who live side by side, unlike intercul- turalism that is characterised by a set of relations in which the implied actors live together with the others. Will the European Union succeed in giving an impulse to the slide from multiculturalism towards interculturalism? This is, no doubt, our days’ great challenge.