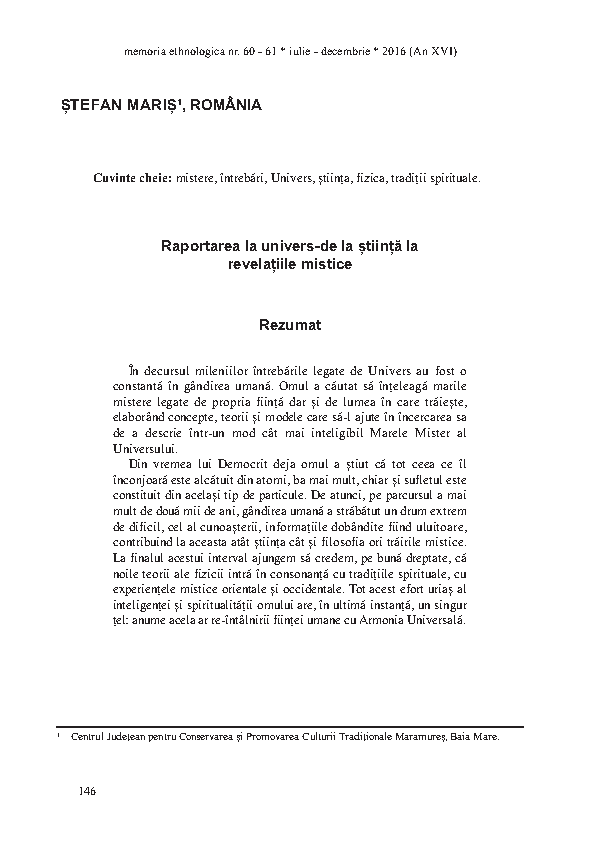 Along the millennia the questions about the Universe have been
constantly present in human thinking. Man tried to understand the
great mysteries connected to his own being as well as that of the
world he lives in, elaborating concepts, theories and models to help
him in the attempt to describe in an as intelligible as possible way the
Great Mystery of the Universe.
From the time of Democritus man had already known that
everything around is made of atoms, moreover, that even the soul is
made of similar type of particles. Since then, along the more than two
thousand years, human thinking has gone through a long and
extremely difficult process, that of knowledge, the information
achieved being amazing, to this contributing science, philosophy as
well as mystical experiences. At the end of this interval we have
reached the stage to believe with justification that the new theories
of physics are in consonance with the spiritual traditions, the oriental
and occidental mystical experiences. All this huge effort of man’s
intelligence and spirituality has ultimately a single aim: namely, the
human being’s re-encounter with Universal Harmony.

Relating to the Universe – from Science to Mystical Revelations

Starting from the last decades of the 19th century, science has taken an innovatory
trajectory as concerns the understanding and interpretation of the world. Especially the new
theories in physics have shown their effects concerning man’s capacity to perceive and
disclose the most profound aspects of material and spiritual life. Albert Einstein’s structuring
the basis of quantum physics represented a real change in the paradigm of modern sciences.
Starting hence, later on, the developments resulting in the elaboration of two new theories
followed: quantum electrodynamics and quantum chromodynamics. These two theoretical
approaches have allowed the elaboration of the most important construction of physics: the
standard model whose aim was the unification of the fundamental forces of nature. The
basic idea of the whole theory was that all the four forces in nature are in essence only
forms of manifestation of a single force. Thus, from this point of development of this theory
it has been easy to go forward, we would say almost naturally, relating quantum physics to
mystical experiences. In order to understand this statement that may seem hazardous, we
will sketch succintlty some of the basic ideas of quantum theory:
a) first of all let’s underline that quantum physics sustains (and demonstrates) that
any material system has a basic characteristic: the wave-particle duality. More exactly, the
electrons, which in the Newtonian theory appeared as particles, can behave as waves under
certain conditions, conforming to the laws of electromagnetics and not to those of classical
mechanics.
b) the totality of actions that are manifest in physics can be measured, and the
smallest ‟fragments” that cannot be divided are the ‟quantums”. The transition of an atom
from one state to another will be with the releasing of a quantity of quantum luminous
energy. Whenever there are interactions between the particles, then these appear as
connected through certain invisible links manifest in the entire environment. On a large
scale these invisible connections are so numerous that their analysis is to be made
probabilistically.
c) a strange property is quantum ‟non-localization”. It is about the interaction
between particles at an enormous distance, phenomenon appearing as if these particles were
interconnected, but the connection between them is unknown. It is as if to say that there is
a ‟whole” that controls each particle in the universe through mechanisms which cannot be
desciphered. It could be stated simply (as there is also the demonstration of this fact2
accepted by scientists) that objective observation cannot be made because the observer, through his action of observing, changes the quantum status of the observed system. Within
the framework of the new concepts of quantum physics the intensity of the energetic field
does not matter anymore, what matters is only its form, namely its structure. In this way
any infinitesimal quantum field can affect a particle modifying its status. Thus intensity
does not matter, what matters is the presence or absence of that quantum field. It is not
necessary for the force to be active, it can exist as a potential, this potential being of utmost
importance in quantum physics.
Another important contribution to the fundamentation of the new relationships in
physics has been made by Albert Einstein who, with his well known formula E= mc2 , has
shown that mass is nothing else but energy in a state of rest. The theory of relativity
demonstrates that the mass of a particle has no relationship with substance (as it happens
in classical physics), mass being nothing else but a form of energy. While energy is a
dynamic gauge in correspondence with the processes of transformation, accordingly, a
particle cannot be imagined as a static object, but as a dynamic entity, thus as a process that
implies energy. The formation of particles from pure energy represents the essential
consequence of relativist physics. The demonstrations of quantum theory have supplanted
the classical concepts of solid body and the strict deterministic law showing that at
subatomic level the solid material bodies of classical Newtonian physics are actually
probability waves and these refer to the probability of interactions.
David Bohm, an important physicist of the 20th century, was very much preoccupied
with the realization of a connection between spirituality and quantum physics. He has
imposed the concept of “implicit order”, as fundamentfundament of his quantum theory.
According to this theory the entire universe is in a certain way ˮwarped”, it contains each
part of it and each part is ultimately a condensation of the entire universe. The universal
order can be revealed step by step, but the the way of understanding this order is only at its
beginning. Bohm is among the first scientists who have launched the hypothesis (actually
demonstrated) that there are multiple universes, beyond the physical or energetic level.
Bohm classifies the dimensions of the universe according to their „subtlety”. The
multidimensional reality is described in analogy with the holographic photography: the
holographic universe is made up of an infinity of dimensions which coexist and are
structures similar to the whole: the universe, having the same characteristics.
In the theory of the spatio-temporal continuum the physical universe is only a strictly
particular manifestation in time of the universe with an infinity of dimensions3. In this way
the fourth dimension represents the dimension of the objects and of the material space
perceived as an extension in time. Binary logic that is familiar to man cannot be applied
anymore. The awareness of other dimensions of reality is a phenomenon that can be
explained and does not belong to the domain of the esoteric. The experiences of expanded
consciousness have as their effect a transformation of the level of awareness – so it is not
reality that changes but the individual’s subjective perception.