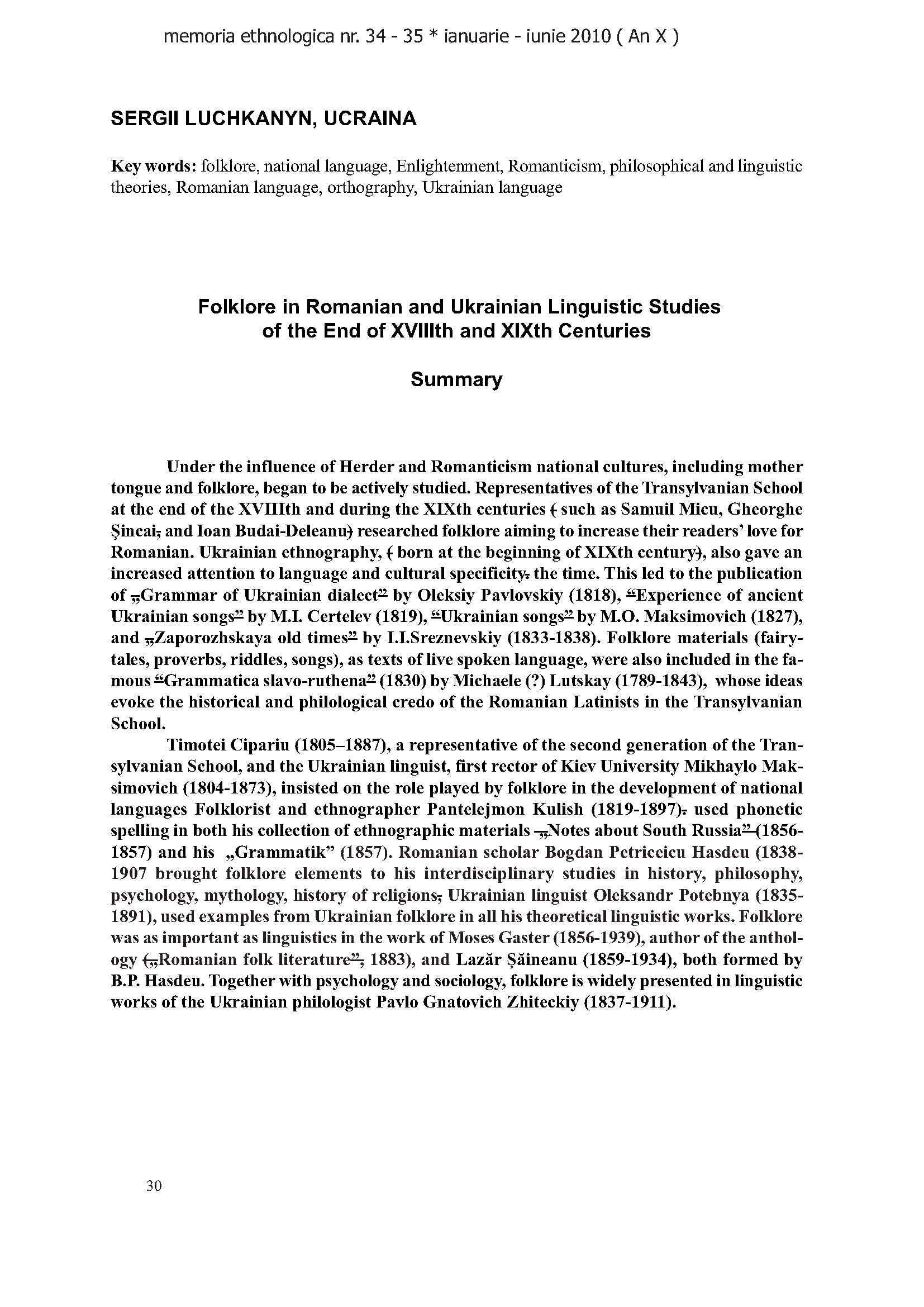 Folklore in Romanian and Ukrainian Linguistic Studies
of the End of XVIIIth and XIXth Centuries
Summary
Under the influence of Herder and Romanticism national cultures, including mother
tongue and folklore, began to be actively studied. Representatives of the Transylvanian School
at the end of the XVIIIth and during the XIXth centuries ( such as Samuil Micu, Gheorghe
Şincai, and Ioan Budai-Deleanu) researched folklore aiming to increase their readers’ love for
Romanian. Ukrainian ethnography, ( born at the beginning of ХІХth century), also gave an
increased attention to language and cultural specificity. the time. This led to the publication
of „Grammar of Ukrainian dialect” by Oleksiy Pavlovskiy (1818), “Experience of ancient
Ukrainian songs” byM.I. Certelev (1819), “Ukrainian songs” byM.O.Maksimovich (1827),
and „Zaporozhskaya old times” by I.I.Sreznevskiy (1833-1838). Folklore materials (fairytales,
proverbs, riddles, songs), as texts of live spoken language, were also included in the famous
“Grammatica slavo-ruthena” (1830) byMichaele (?) Lutskay (1789-1843), whose ideas
evoke the historical and philological credo of the Romanian Latinists in the Transylvanian
School.
Timotei Cipariu (1805–1887), a representative of the second generation of the Transylvanian
School, and the Ukrainian linguist, first rector of Kiev UniversityMikhayloMaksimovich
(1804-1873), insisted on the role played by folklore in the development of national
languages Folklorist and ethnographer Pantelejmon Kulish (1819-1897). used phonetic
spelling in both his collection of ethnographic materials „Notes about South Russia” (1856-
1857) and his „Grammatik” (1857). Romanian scholar Bogdan Petriceicu Hasdeu (1838-
1907 brought folklore elements to his interdisciplinary studies in history, philosophy,
psychology, mythology, history of religions, Ukrainian linguist Oleksandr Potebnya (1835-
1891), used examples from Ukrainian folklore in all his theoretical linguistic works. Folklore
was as important as linguistics in the work ofMoses Gaster (1856-1939), author of the anthology
(„Romanian folk literature”, 1883), and Lazăr Şăineanu (1859-1934), both formed by
B.P. Hasdeu. Together with psychology and sociology, folklore is widely presented in linguistic
works of the Ukrainian philologist Pavlo Gnatovich Zhiteckiy (1837-1911).